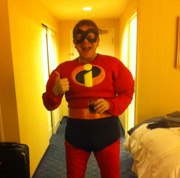 Jay Napier is Mr. IncredibleIt is so easy to take everything for granted. Let's take for example, turning on the TV. Next to none of us give this simple task a second thought. I have had days when I came home from work so distracted that, after a few minutes of scurrying around the house, wondered if it was actually me that turned on the TV.

When you enter a room, do you make much of a mental exercise out of turning on the light? I don't. It is like breathing, I just do it. What about turning on a fan or changing the thermostat if you're too hot or cold. All of this is pretty simple stuff and most of us don't give it a second thought - that is, until you can't do it anymore.

For Jay Napier, this question was thrust upon him and his family on December 7th, 2012 when, in an instant, he became paralyzed in a car accident. All that he had known before was now altered, and for a while, the future was very uncertain. Now, after months of recovery and rehabilitation, Jay is back home with his family and the new normal is being defined.

Jay is lucky in many ways:

As one might expect, his ability to take care of himself is very limited and he needs a lot of help from his family for almost all day to day tasks. After his accident and while he was in rehabilitation, a dedicated group of friends and family went to work remodeling his house to accommodate him and the equipment needed to help care for him. It was a heart warming effort and I was quite inspired to see so many people come together to volunteer their time and money to help. When all was said and done, they were able to provide a comfortable area for Jay with enough space to make managing his care as good as it could be. (For more information on this effort, please see the Facebook page Prayers for Jay)

New Normal - A Work in Progress

Celebration dinner out
Click for larger imageBefore the accident, Jay made a living primarily from working over the Internet. He is a socialite was out and about frequently for networking events and sales calls as well as having a prominent online presence. Jay also loves to travel and see new places.

Since the accident, he still loves to socialize but hasn't been able to due to his limited mobility. Now, with the help of his family and speech recognition software, he is venturing back out - virtually. He is able to use Dragon Naturally Speaking to compose notes and posts for Facebook and his blog.

I spoke with him a few weeks ago and he was trying to get a very nice donated smart TV to change the channels on his cable box. Unfortunately, we were unsuccessful with this task.

His primary concern at that time was to be able to change the channel on the TV without having to disrupt his wife. "I'm a second full time job for her and I really would like to not have to bother her with these simple tasks" he said. I asked him what else he has to have help with that is simple but tedious for his family.  Jay listed several things.

This got me to thinking about voice control systems in general. The last time I looked seriously into VOX systems was around 2000. Back then, they were just a pain-in-the-butt novelty that would 'eventually' be the way people would interact with technology. A LOT has changed in the last 13 or so years! Today, voice recognition (VR) has improved to the point of being useful and in some cases even preferred. I love texting using the vr built into my android phone and prefer it now to typing in the messages.

Using Jay's short-list of needs, I began looking around at some off-the-shelf solutions and after just a short period of time, I feel confident that all of the items on his list can be accomplished! Now, I just need some help!

Below is a video of a system based on VoxCommando that really has my interest. It demonstrates almost all of the goals of this project.

So, doesn't this sound like an exciting project? Doesn't it make you want to help! I thought so! So, here's how.

If you want to help in any way, the first step is to contact me. I'm pretty flexible and no offer will be ignored. If you want to help but you would like to remain anonymous, by all means! I will not sign you up for any spam lists (aka newsletters) or let anyone know of your involvement without your permission. (That's the easy part since there aren't any newsletters here anyway). However, if you want to be highlighted for your good work, then I am likewise thrilled to sing your praises! Assistance needed:

I realize that many of you may not know how to help with the technology of this project and think to yourself, "I can't help" but you can! Let others know about this project and introduce me to your techie friends who you think may like to help.

Even better than that, you can contact me AND you can join me at the next MTRAS meeting held monthly at the Adventure Science Center in Nashville TN! You can learn about them on their website or on their facebook page.

By accepting you will be accessing a service provided by a third-party external to https://andrewhoover.info/