Since February of this year, I've been working on a lengthy project - I am slowly adding digital control and automation to the everyday things in our home. This project, unlike most of the others I've started grew out of a need rather than a want. Sure, the want is there and I'd be lying if I said that this wasn't one of the most fun projects I've committed to but, in this case, this project started with attempting to fill a need. Now that this project has matured a bit, I want to start chronicling my journey so that others with a similar need may find these experiments useful.

Six years ago, a friend of my wife was injured in a car accident that resulted in his full paralysis. That devastating event began the question of what would we do if one of us was in a similar situation. I started doing research then on home control and automation and was really surprised at how limited the options were for severe cases like his. What options there was were very expensive as well.

A few years ago my wife sustained a spine injury in her neck - a disk was injured during a Chiropractic session and in the years since, a series of events has led to some permanent spinal cord damage. Thankfully, she is able to walk with assistance and can handle most everyday tasks but she does have some limitations such as climbing stairs. Since we live in a two story house, this limits her access to parts of our home. It became clear that we would need to change some things around the house. While my wife's situation is not nearly as severe as her friend's, the same limited set of options are still out there. We both could write volumes on how inhospitable our society and day-to-day environments are for those who have disabilities, but I won't. Those of you who understand the need already know what I'm talking about.

So, in an effort of brevity, here is my checklist of needs:

As anyone who has had a big medical event can tell you, it comes with big medical bills and other costs so, what we were doing needed to fit in the new budget. We simply can't afford a system that requires a high up front cost and / or has a high cost per device controlled. Think about how many lights you have in your house and now multiply the number you want to control by $15 or $25.

For example, let's look at one popular scenario - wireless light bulbs. They seem like a pretty easy solution and not terribly expensive but the kits can be kind of pricey - around $60 to get you started. You set up a base station for the bulbs to talk to and start adding the bulbs. The setup isn't too difficult but there's more to it than just installing it in a fixture. Each bulb costs around $15 each (more for the color change version). They have a mean lifespan of about 5 years (they claim longer but the user experience is typically around 5 - and less in bathrooms or other damp / humid environments). When they eventually die a replacement bulb has to be purchased and setup, again.

How many standard light bulbs can you buy for $15 and how much time does it take to replace them?

Now, what else do you want to control?

All of these questions have a cost associated with it.

My wife has difficulty climbing stairs and because of this I started this project with the idea that we needed a way for her to be able to monitor and control the upstairs lights. Since then it has become a way for her to know more about the state of the house and for us to be able to setup automations for time of day events, events that happen while we are away, and in time, be able to make our home more energy efficient and secure. We can currently set modes like evening mode or away modes that control what lights are on and when. With presence detection, we can also have things happen when we get home, like turn on the front door light if it is dark outside.

Eventually, we would like to incorporate more environmental data to manage the HVAC system for better control and energy efficiency. There are a few systems on the market that do this now but I want to alter my ducts for zone heating and cooling which few of these systems support. Since our house is older and doesn't have an open floor plan, each room temp can vary by as much as 10 degrees, so these changes would be well worth the time to implement.

One of the most important aspects of this project is an effort to improve security. When I say security in this context, I'm not just talking about someone breaking into our home although this is also important. For someone with a disability, security takes on a new meaning - personal autonomy and safety. For someone with a spinal cord injury or other similar issue, the thought of falling is truly terrifying. So, it is important that this new system also attempt to address some of these concerns as well. For example, can this system incorporate a panic button or voice command to call for help? Can the system detect falls by "listening" for signs of a fall like broken glass or bangs?

Another aspect of security that is becoming more and more important is preventing the outside world from breaking in from the internet and wreaking havoc on the new system. How secure are these systems and devices and do they require the internet to work? Do you trust yet another company to keep your data, passwords, credit cards, and other sensitive data safe? What happens if someone does break in? This one is a tough nut to crack and there's no way around the technical complexity involved. However, there are a few simple things that help prevent common problems such as making sure that the devices you buy have the ability to change the default password, buy things that don't need the internet to work at all, and have well established security protocols in place if they do require the internet.

However, there's no getting around the need for you the user to get familiar with internet security and safety. YOU are the weakest link. Period.

Of course, I also want this system to take on home security as well. This part is pretty straightforward:

The system must just work - all the time - and recover from issues like power outages without user intervention. Period.

We live in the middle of our community and share the same power grid as our city government so, power outages for us are rare but they do happen - and oddly in clusters.

The simple answer had better be 'nothing'.

From the start of this project, I one overriding goal that steered all of my design decisions - the house has to fail dumb, not stupid. Meaning, if the system dies a horrible death, life has to go on as if it didn't exist. Lights still need to work, the HVAC system still needs to heat and cool the house and the smart stuff needs to go back to working like it did when it was dumb - it just worked.

Commercial products are getting better at failing dumb but there are several examples in the news of serious failures like door locks that wouldn't work and lights that wouldn't work if the internet went down. We cannot have this. Not in a home with someone with a disability. So, when possible, I use only systems that fail dumb. As an example, all of the wall light switches and lamp cord switches are set to restart in the last known state - if the light was on when the power went out, it will come back on when the power is restored. If the controller can't be found, then all of them have an override button on them for manual control. 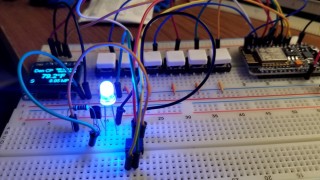 I am also testing systems on the bench long before they are used in the house. I make them fail in every way I can think of and see what it takes for them to work again if at all.

For my devices to pass the test, they have to survive my little shop of horrors.

This one is very tricky and so far, I've found that you can't have everything in the check list above - not yet. The biggest obstacle when talking about home automation and IoT is the lack of common standards. Most things do not natively talk to most other things. In most instances, you must have a hub or central computer to manage all of these things and present a "control panel." An example is SmartThings. It is the closest commercial item on the list that fulfills the checklist above but still has its issues. Namely for me is the internet requirement. While they have gotten a lot better on a dependency of a working internet connection to function, it still needs one and additionally, they use and sell your data - just like everyone else.

So, I am using self-contained systems and devices. In the following posts, I'll go into more detail what I'm using but long story short, my setup is complicated but the ease of use for my family is good and improving. It can improve because I'm using open source tools and protocols for the system to communicate with. I'm working through the complicated stuff myself so my family doesn't have to and best of all, if my controller dies, the house still functions like it did presmart-house until I replace the controller in 5 minutes with a backup. The family can control things with an app on their devices or by using conventional wall switches like usual. I am testing a wall switch design that will allow for lamp control and automation control using a standard wall box and decora style wall plate. This will finish off phase one of my project.

I will be posting a series of articles devoted to what and why I am using and building. There are many, many articles out there on home automation and you tube is filled with channels devoted to how to's from the perspective of the average tinker-consumer. My perspective is from someone with a disability and while I won't go into all of the details on how to setup this or that thing, I will point out other articles, videos and resources for recreating those things. First up is my chosen controller - Home Assistant on Raspberry Pi.