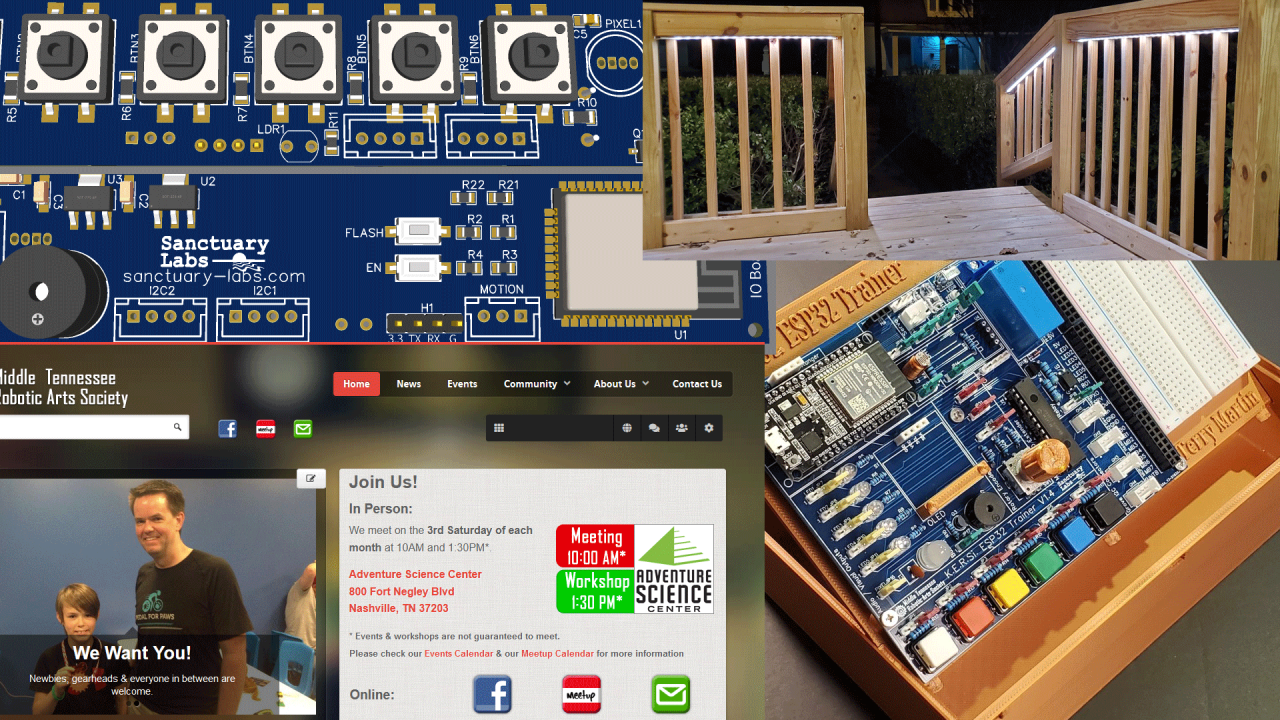 Anyway, a lot and a little has been going on since my last home automation project overview. I have been really busy with odds and ends over the last year and a half although, only a little has been spent in any meaningful additions to my sub projects - save one!

In my article "My Home Automation Project - 2 Years In" I listed a set of objectives I made for myself. While I did work on many of these projects and did make some advances on the list, most of these are still unfinished. I won't rehash all of the details here but just as a summary:

What's the hold up?

In a word, Renovations.

There are few larger time and money sinks than home renovations. They are a necessary evil that sometimes can open opportunities such as was outlined in my article "How a faulty washer may have saved our lives" However, most of the time they just zap your energy and wallet.

New laudry rooms to new roofs, months slip by and then you're into the holidays. Sheetrock and painting goes pretty quick in my mind but centuries to complete in real life.

Now I can't just blame renovations. The pandemic does play a little role. Not having the normal face-to-face MTRAS meetings has withdrawn some of the self imposed peer pressure to "show up" each month. It is easy to lose self accountablility when external accountabilities are over zoom.

So, what HAVE I been doing?

While the bulk of 2020 was dominated by the pandemic and renovations, as mentioned above, some work and experiments did get done.

For example, I have fought with LED lighting for over a year. I had no idea how problematic some light strips can be. I wanted to have both RGB and dedicated warm white LEDs included in my lighting. While the white elements would be used primarily, I also wanted to be able to have colors for a bit of holiday fun but also as a means of notification and assisted route lighting.

Part of my home security system requirements is the ability to use lighting to show a route out of the house in the event of a fire. The idea is that if you're crawling on the floor trying to find the 1)safest (least likely path AWAY from fire) and 2) shortest route out of the house, it would be beneficial if the house could help you by showing you a way out using LEDs in your baseboards. I've been using a couple of different LEDs but the ones with a white channel are much more likely to overheat and cause strip failures. It has been a tricky problem to solve.

Most of my strips have failed - some quickly within days and some after only a few months of use. I think that the solution is two fold: 1) limit lighting to either RGB lighting OR White lighting to limit the current of the strips and 2) find better heat sinking materials and strips that have better thermal tape.

I have been taking advantage of my renovation projects to install better sensors, network cabling, modern plumbing and electrical wiring. This has been very useful in getting some of my security goals realized like automatic water cutoff valves, door sensors, metering, and motion/people detection.

I am also adding some interaction between some standard items like door bells and the home automation system. For example, I have intercepted the doorbell button presses with sensors and relays so that I can 1) capture the doorbell presses to trigger camera actions, notifications and so on, and 2) give the doorbells a "mute" function so that they can be turned off when not wanted aka naps, baths, etc. Effectively, the doorbell now has modes of operations that can be both manually and automatically chosen.

In 2020 I discovered DeepStack AI and it's power to greatly limit the noise that standard camera motion detection creates. With Deepstack, you can limit the number of triggers from BlueIris down to only humans, cats, cars, etc. or a combination of those. I can't begin to express my elation at having this tool in hand. This year, I am working on training the inside cameras to detect faces so that the system can know who is where. This will jump-start one of my more ambitious security projects

At the end of 2020, my robotics group managers and I talked through several scenarios for remote workshops. Our experience has always been that even in-person electronics and programming workshops require the instructor and a couple of people working with participants to iron out issues as they arise. These issues usually center on connection problems between components, bad breadboard rails, bad components, or just various issues connecting microcontrollers to PCs to program them.

Of course, I wanted to tackle a workshop that had all of these issues rolled into one over zoom! (Bear in mind that these conversations started back in October 2020) So, we looked at kits that are pre-built or limited focus and none of those were very useful from a learning electronics point of view. I had an idea of making a kit that used jumpers to make circuit connections so that we could limit most of the possible setup problems that the participants would have.

Anyway, 5 months, 10 circuit designs, 4 printed circuit boards, and 4 enclosures later, I finally came up with something that I thought would make a good remote trainer for absolute newbies. The K.E.R.Si. kit. This kit offered a lot of components and connection options using the ESP32 as the microcontroller.

In April 2021, we began a 13 week workshop series. It was a challenge but seemed to be well received.

This board wasn't just pulled out of thin air though. This was the culmination of the previous 3 years of research and development of all of my automation projects. Although we aren't currently holding any workshops with the kit, I am using three of them right now to develop my projects and to test code.

I am also revising my design to incorporate more components and to make the existing design more flexible. I hope to finish the next version by the end of March as I've been testing the prototype for about 2 months now.

This project has also taught me a lot about the manufacturing process. I hope to make this and some of my other projects into commercial kits but before I'm ready to do that, I need to understand supply chain, manufacturing automation and outsourcing. It has been really fascinating and challenging.

For 2022, I am finishing up a new version of the kit and a new workshop based on the lessons learned last year. I am looking forward to working with new electronics and coding students to expand our knowledge and ideas!

2022 and Reemerging Into the World

One other larger project that I have been working on is the revamping of the MTRAS website. Started in Late October, I needed to clean up and modernize the site that had sat neglected for a number of years. I am also taking on a more central leadership role in the group (actually have been since the start of the pandemic) and it is important to me that we use this emergent year to try to get back some of our numbers and projects. So, I've added a lot of new social tools to the site and have planned out a number of high profile events for the 2022 year.

I alluded to some board work above. Here are some projects that are moving out of the beta stage and into production:

This year will see some more renovations as we modernize some of the older parts of our 100 year old home. Although this year will likely see more painting than tearing out sheetrock, we do have a couple of larger projects in the pipleline. Hopefully they won't derail my other projects as they have in the past.