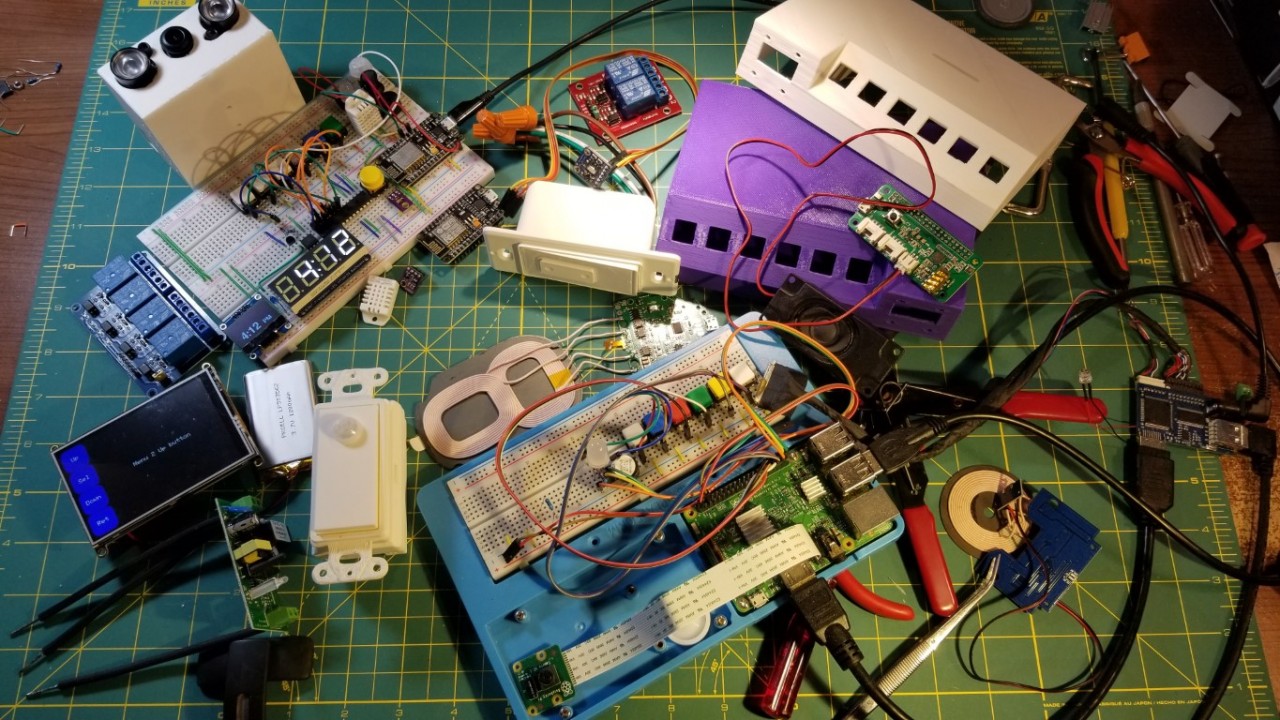 So, I have two years of projects and ideas behind me. With all of the fits and starts, labored undertakings and successes and failures, what does the next year hold?

Before we get into the future, it may be best to see what has been done. I outlined in this article my home automation roadmap that details a laundry list of projects that I am working through. However, 2019 became a year of research and development as well as having other projects accomplished that weren't so technical.

Home Lighting Control - While I do have some automations in place and projects I have planned this year will give me more data points for the automation bits but, primarily as budget allows, I've focused on control for the most part. I have nearly all of the lights now switched with a remote switch of come kind. I opted for switches over bulbs due the need to replace bulbs in time and the fact that we don't really need / want color changing bulbs. I am using a mixture of switches for this but to name names,

Bedside Control Panel - I've been running my Bedside Control panels now for exactly a year and am amazed that I got so much right the first time around. It does exactly what I set out to accomplish which was to control the lamps, overhead light and fan and raise and lower the head of our bed, all in a form factor that gives us a clock and wireless phone charger - limiting nightstand space and cords. In the whole year, I've had 2 instances where the device locked up. I was able to identify the code error and correct that. It has been one of the few prototypes that I've built that has worked from the start with almost no changes.

Weather Station - My weather station project has probably consumed far more of my time that it should have. Over the course of the last year, I have revamped the main board and tested out some new sensors and configurations. I now feel that I am very close to a completed project and will write up a new post on this soon. The latest incarnation can be found here on Instructables. Incidentally, this project did place in the second prize group of the IoT Challenge!

Locally Processed Voice Control - I was making some pretty good progress with this project which used Snips as the core processing engine until Snips was bought by Sonos and subsequently closed. Not everything I did was trashed but I did learn a valuable lesson about relying on a for profit company to keep my dependent projects afloat. I am now switched over to open source projects and am starting over which, has taken a mental toll. I was really tempted to shelve it and just work with cloud products. I eventually shook off the feeling and sold or gave away the only two voice assistants I had. (No going back now, damn it!)

Cameras - I've added a number of cameras around the house and have started playing around with person detection both through Blue Iris and using several open projects like OpenCV, OpenFace, and others. This one has been lower priority so a bit slow going.

Home Info Center - I took a break from this project for about 8 months due to other projects and real life events taking precedent. However, I did realize during my development that I was working way too hard on developing things that already existed. So, I simplified my efforts to develop web based applications on a central server I was already using for Home Assistant, media and networking applications so I can have a hardware agnostic information center that can be used on phones, tablets, PCs, laptops, or dedicated equipment like my info center or even a MagicMirror!

Maker Faire! - Every year, my robotics group (Middle Tennessee Robotic Arts Society) participates in the local Mini Maker Faire in Nashville and every year I try to build a new project for the faire. This past year, I extended my home automation demo display. On the whole, it was very well received and generated quite a bit of interest. However, my favorite memory was of my son teaching Chewbaca how to control our robotic arm!

Other Odds and Ends - Of course job and real life tends to push back on my project ambitions but in addition to the stuff above, we also did some home renovations in 2019 that will have some indirect benefits to my goals below namely, we installed a new front door, concrete driveway and access ramp as well as remodeled the master bath. The benefits being a ramp for my lift assist bot to real world test on and rewiring some of the old wiring to be more smart switch and sensor node friendly.

This upcoming year will be busy as I continue with existing projects and start a few new ones.

ESP Device Core Software - As described in Project S1.4 - Control panels, I've been developing some common software to be used with minor changes between each of the CP variants that I've been developing and testing. As the project has progressed, I've seen a natural progression away from this more dedicated use case in favor of a more modular based code. This will allow me to use this same software for each of my ESP powered projects. A future blog post will detail the feature set of this core code but to summarize:

This software will be used in the first set of items shown above (ESP control panels, sensor nodes, buttons, and the thermostat). I have some other variants of each of these that will use the same boards in a different package. I'm finalizing the code now and working on version one of the PCB layouts for the new control panels. I hope to have my next set of prototypes built by the end of February.

RPi Control Panels - These are smaller versions of the Information Center design I am working on. These will use a dedicated set of screens from the server for a simple UI that will take the place of 2-gang wall switches. In addition to the typical web UI of HA, these will also have a set of buttons, sensors and relays to control the circuits that the CP replaces. I hope to have an in-wall prototype in testing by the end of March.

Information Center - I plan to kick up the heat on this project in March along side of the RPi Control Panel since they have a lot of overlap. I hope to have a prototype built by the end of March or mid April.

Weather Station Final - I am working through some final coding changes, sensor and sensor location swaps, and a brand shiny new PCB for my project. This should be done by the end of May.

Smoke Detector Integration - When we moved into our house 13 years ago, one of the first things we did was to have wired smoke detectors installed throughout. However, rather than put in regular detectors, I opted to have the better relay augmented smoke detectors installed with their extra relay contacts. In addition to the code required interconnected detectors all going off in the event of a fire, these extra data lines gives me a way to know which one set off the group. I am working on a security panel that these will be integrated into.

Under Counter Lighting - I've been wanting to add under cabinet lighting in our kitchen for a long time. This past year I researched options for adding this lighting with the least cost and highest reliability methods and this year, I'll make it happen. I have to run some AC lines as a prereq for this project which is why it hasn't happened yet.

Lift Assist Bot Phase 1 - This is THE big project for this year. This is a multi-year, multi-phase project that will result in a robotic platform to help people with disabilities move heavy things around the house and, if they have an access ramp, help them take things to and from the car. The first phase of this project is R&D on the physical properties of the platform, drive systems, sensors, safety systems, and other features. This phase of the project will have a lot of sub-projects as you might expect and will require me to learn a lot about fabrication techniques and mechanical system design.

Thanks for your question.
No, it doesn't take two years to add smart switches, bulbs and a hub. If you go the consumer route (buying your devices rather than building them) then you can automate your home in a few days or weeks.

It has taken me a long time to do some relatively simple things because of the following:

These days there are more resources available if you wish to build your own system as I have and I'm working on a series of posts to detail some of my designs to date so that I can also contribute to this growing body of work.

I hope this answers your question.
0 Cancel Reply
Thanks for your question. No, it doesn't take two years to add smart switches, bulbs and a hub. If you go the consumer route (buying your devices rather than building them) then you can automate your home in a few days or weeks. It has taken me a long time to do some relatively simple things because of the following: [list=1] [*] I am not just buying devices; I am building my own or altering the ones I do buy - I don't want to rely on the internet for things in my home to work and I don't want to share my data with all of these companies [*] When I started, there weren't nearly as many resources in the DIY community for building these things as there are today so, I had to develop a lot of things myself - which takes time. [*] I am not wealthy so, I had to take up projects when I could afford to. [*] I am also not blessed with an abundance of time so, I work on these projects a little as I go. [/list] These days there are more resources available if you wish to build your own system as I have and I'm working on a series of posts to detail some of my designs to date so that I can also contribute to this growing body of work. I hope this answers your question.
Cancel Update Comment
1