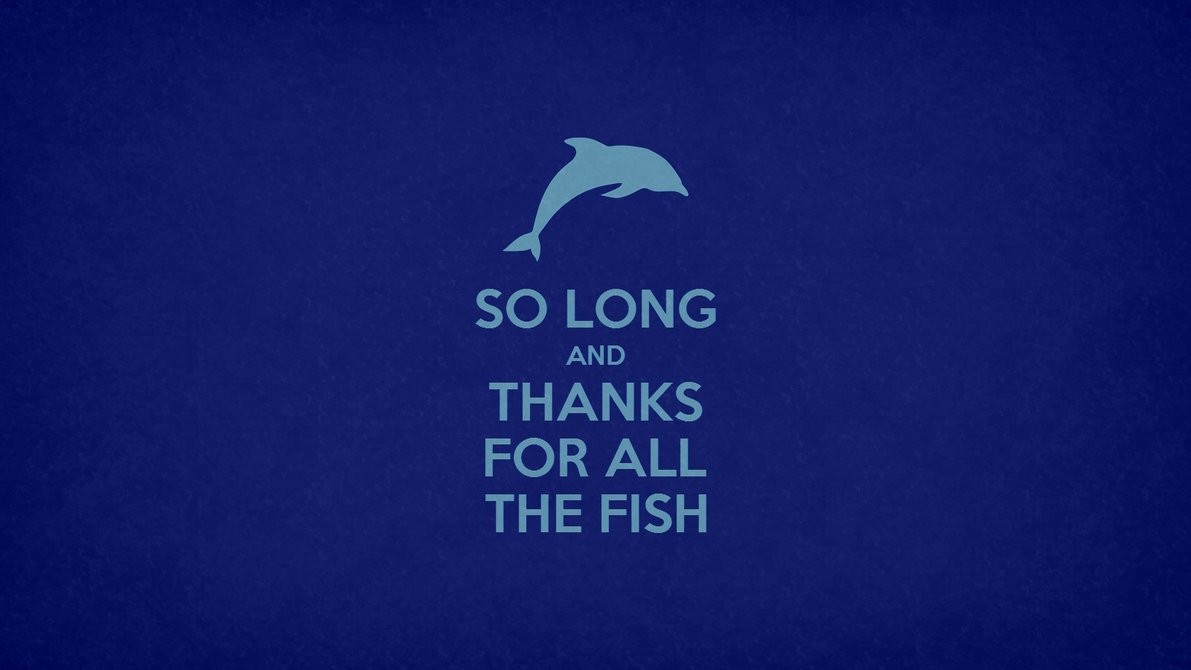 Ok, this one is short and simple. Later Facebook and Twitter! So long and thanks for all the fish!

A few months ago, I kicked twitter to the curb. For me this wasn't a big deal. I wasn't on there much and I never really "got it" anyway. It felt like shouting into the storm. So, when the time came to press the "Delete Account" button, I felt nothing. No separation anxiety, no remorse.

I likewise didn't "get" most of the other social media apps like snap chat, Instagram, etc so, I never joined up - nothing to see here.

I have a LinkedIn account that I keep my CV on but I never viewed it as a "social" network and never posted any other content. I still have my LinkedIn account just in case it might accidentally be useful, maybe, someday. There are several articles touting the power of LinkedIn and others chiding it. All I know is that I've never had a full time job offer through the service and I don't know anyone else who has either. Now, if I want a contract job? Yeah, there's plenty of them. Take your pick.

This is the only social network that I ever really connected with. I have friends there. I have memories there. There is a history. Our relationship with FB is not unlike a bad relationship.

Remember when Facebook was cool? People shared their vacations and stupid jokes and memes and everything was just fun? That lasted about a year I think. Then just like any relationship, the honeymoon phase wore off and real life set in. The reality that advertising paid for the party started becoming clearer and a bit of paranoia set in.

Suddenly, Facebook became a little too possessive. Sure, you could hang out with your friends but never by yourself.

Even when you were away and visiting other sites, there FB was, "driving by" via some sidebar, "friends who also like this page." Things started to get creepy. And then, betrayal.

As it turns out Facebook was talking about you to its friends behind your back. First little things like what you liked, what kinds of things you bought, etc. But then you find out that they also started letting people read your diary and relaying secrets that Facebook promised to keep for you.

The outrage came and went. You swore to leave but Facebook promised to change and swore it was sorry. And you believed it. Things went back to the way they were, and for a while, you were really happy.

The reality was, that things didn't change, though. You found out that Facebook was, in fact, selling your private conversations to others! Not only were you lied to, you were made a fool of.

This is how I felt, anyway. I knew that in the end, I was a marketable dataset but I didn't anticipate how far reaching that dataset was or how much of me would be represented.

Not anymore though. I realized it was time to cut ties and go. However, unlike the casual relationships I had with other social media sites, my Facebook relationship had grown beyond just me. It can be compared to a couple having kids. Breaking up is made much more complicated and, if I'm being honest, traumatic as well.

Breaking up is Hard, but Necessary

I think of the logistics of cutting ties with Facebook a lot like a couple who have kids AND own a business together.

The kids part is not unlike trying to change how you interact with your family - more distant and therefore it is easy for people to feel neglected or outright forgotten. I think that is one of the biggest reasons that people stay on Facebook - everyone they know is there and interacting with them is easy.

Personally, I think it has made us lazier too. People don't put forth the effort to stay connected - they don't plan to meet for meals or go hang out like they once had to. Some people have allowed Facebook to be the only way they interact with others. I kind of fall into that category. With only a few exceptions, I've allowed myself to be quite the recluse. Not really intentionally, it just kind of worked out that way.

To remedy this, I announced my departure from the platform and I've exchanged contact info with many people I want to try to maintain a relationship with. I will plan "get-togethers" and work to connect in the real world. I'll send messages from time to time to just say "hello" and "hope you're well."

The business part is probably going to be one of the harder parts for me to reconcile and I haven't fully decided what to do about the groups and page I manage as well as belong to a number of worthwhile groups that I've come to rely on for support and guidance. These resources are very valuable to me and not for sentimental reasons and are only on Facebook. Removing myself from these groups is a bit like cutting off my nose to spite my face.

My initial thought is to "hollow-out" my Facebook account - deleting my history and data and just using the site for those groups that I use/manage. I've already started to do this.

As it turns out, it will take a year to do this. The reason is that Facebook makes deleting this precious data as painful as possible. You either have to do it all at once by deleting your whole account, waiting 30 days for it to be purged from their system and then creating your profile again, OR you remove the items, one at a time and only for the current month for each year. When January rolls around, I can then clear all of the January data for each year I've been a member. Then wait for February and repeat.

They do this because this data is YOU. If you delete it, they lose the statistical data needed to create an advertising profile on you. All that data is how they know what ads to place in your feed - the ones that you might click on, the ones you'll have a hard time saying no to.

This is what they don't want you to do and is the only power you have over the network. That's why you get hit every day with your memories notification. They want you to be emotionally connected to that data which, is so valuable to them.

It works too. I felt bad deleting old comments and happy birthdays and likes on people's posts. I felt guilty and had to stop several times.

But then I remembered, I had pulled down a backup of all that data already using a tool that they created when they promised they would be better and lied. I also remembered how angry I felt when I saw work contacts in my backup data file that they said wouldn't be there anymore. (By the way if you have messenger on your phone, your contacts have been uploaded to Facebook servers at one point or another)

The angrier I got, the easier it was to remove this data because I know that the people who know me, have no doubt that I love and care about them and that this isn't about them. They know me well enough to know that it's time to move on.

I thought that I would keep my Facebook account for the groups I'm a member of but the more I worked to clear clutter, remove data and limit my time on there, it became clear that the only way to disconnect was to just fully disconnect.